Twitter's Most Trending Emojis will Bring Your Apps to Life 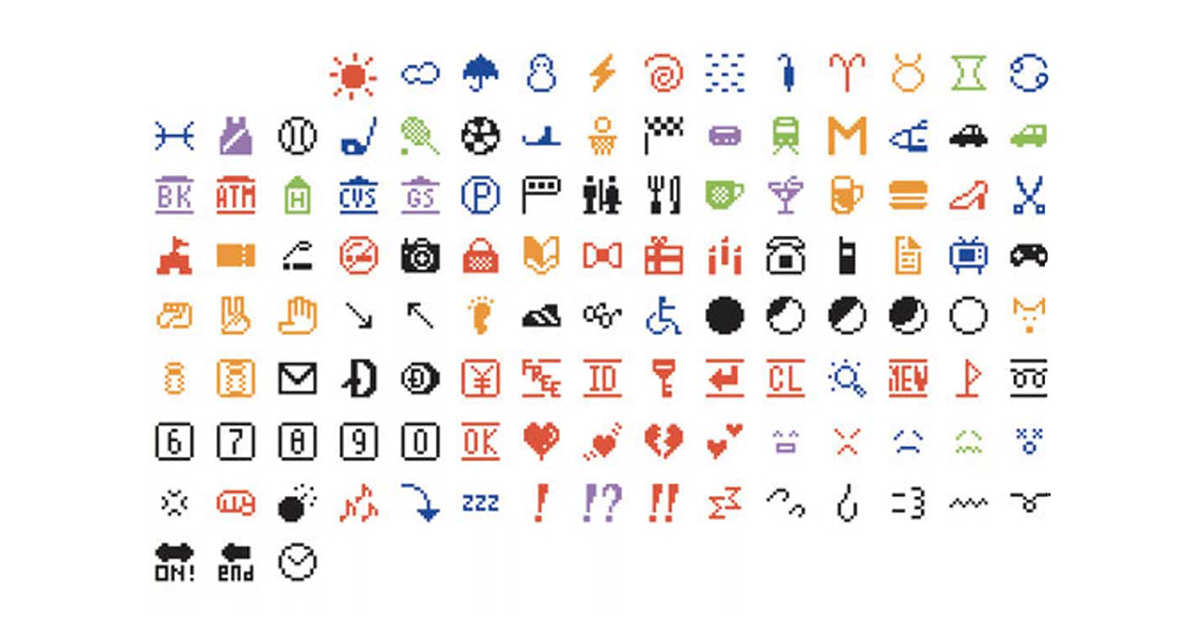 The very first emojis appeared on Japanese mobile phones in the late 1990s. Designed by Shigetaka Kurita, they were created to help people communicate on devices that restricted emails to 250 characters. By giving people a range of icons to use, they were able to say more.

The word "emoji" itself, comes from the Japanese 'e', meaning 'picture', with 'moji', meaning 'character'. 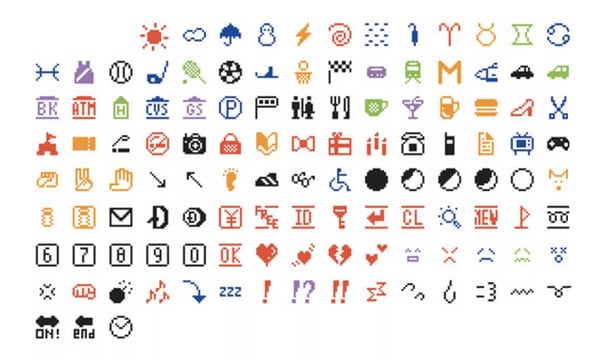 The world's first set of emojis, created by Shigetaka Kurita

Fast forward a couple of decades and we have now over 2,500 emojis at our fingertips...

A small selection of the 2,500 emojis available to us today

Every year, the internet is introduced to a new collection of emojis, continually giving people more ways to express themselves. 2019, for example, was a great year for diversity with the inclusion of disabilities. 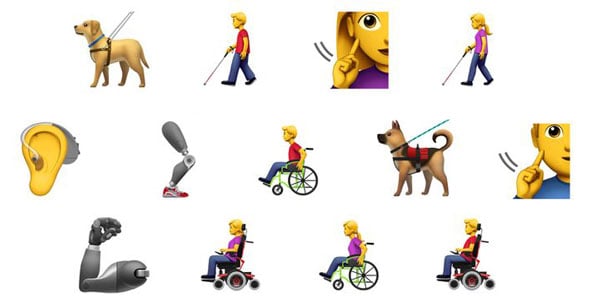 People with disabilities got representation in 2019

Emojis play an important role in the way we communicate with one another, so everyone should have an equal opportunity to express themselves.

From personal stories to brand stories, emojis can also provide your business with valuable insights, giving you new ways to connect with customers, improve accessibility and talk about your company.

Let's have a look at the most popular emojis currently being used on Twitter, and how this information can be used to help develop your app.

The 'Smiling Face with Hearts' emoji has only been in play for a few months, but you'd be forgiven for thinking it's been a part of the Twitter-verse for years. It's already passed the million mark in terms of page views, so it takes the top spot as the most popular new smiley on the web. Twitter's top emoji remains Smiling Face with Tears, proving that you don't need to be brand new to trend.

An emoji is worth a thousand words, so it has enough cultural relevance to play a central role in branding and user interfaces. Developers are using smileys in metadata, emoji-based games, and content text fields alike.

Twitter's second and third most used new emojis are 'Pleading' and 'Woozy Face'. The internet has seen enough versions of the latter to keep you occupied for a year's worth of Saturday nights, but none are quite as out of sorts as 2019's new offering. Despite its 350,000 page views, it hasn't kicked 'Loudly Crying Face' out of its number two spot. It turns out that girls and boys cry.

'Crying Face' has as many male users as it does female, so if you need a visual representation of your app's error messages, this one is suitably emotional. Feeling appreciative of your new users? 'Smiling Face with Heart Eyes' has held onto its number three spot, with 'Red Heart' following in its tracks.

The point emoji might not be as impassioned as its front runners, but its functionality has made it a favourite on Twitter.

It’s frequently used to highlight links in tweets, and it’s equally practical for interfaces and in-game text boxes. Intuitive user experience relies on the universality of symbols, and the point emoji erases any need for words.

If 'Thinking Face' was a real person, it would be Richard Dawkins. It's become an ironic accompaniment to right and left-wing insanities alike, but that doesn't mean it has no role in software development.

This is the emoji for sceptics, so it's a required inclusion in support messaging systems and chat apps.

The most popular new emojis of 2019 were smileys, but they haven’t unseated the old-timers that have been trending on Twitter for years. The most anticipated emojis are more diverse. The future might bring us a few furry friends, edibles, and new symbols to add vibrancy to your toolbars.

Global App Testing wanted to find out more about the use of emojis.

For the research, we looked at data on which emojis were being used most in trending tech and business hashtags, and here is what we found...

#Apple
Among trending technology and social media hashtags on Twitter, #Apple seemed the most celebratory with such emojis. 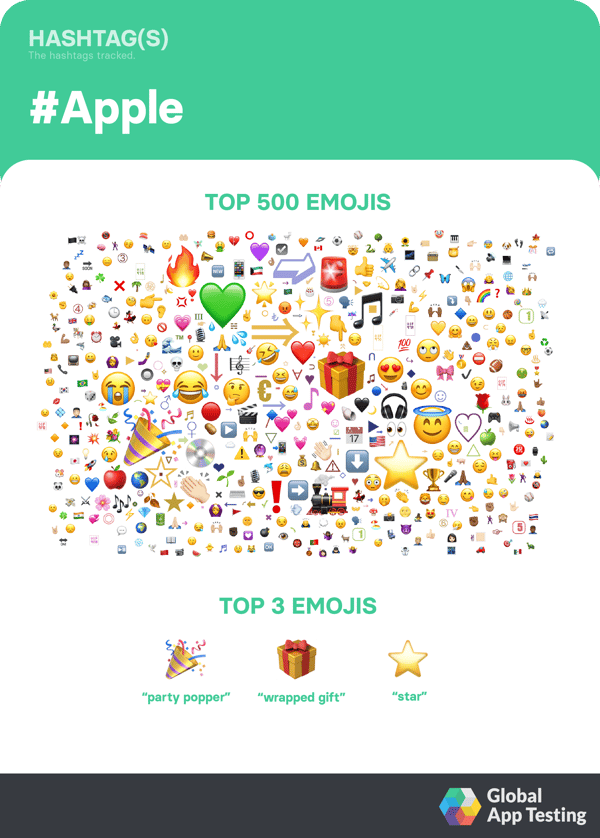 #Emoji
#Emoji returned more colourful emojis during the season of Pride, with lots of love to go around with 'Hearts' and 'Heart Eyes'. 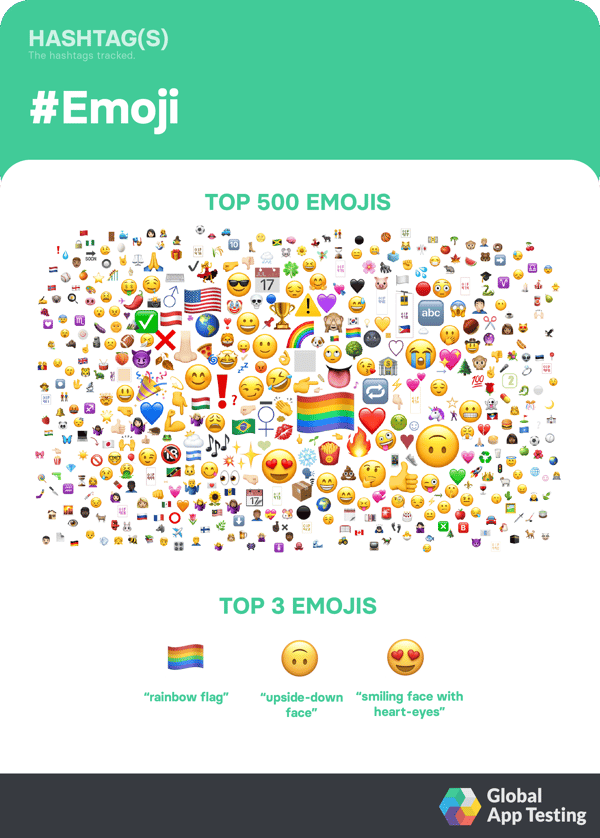 #Entrepreneur
Perhaps laughing at success or maybe failures, the hashtag #Entrepreneur showed us laughing emojis and the fire emoji. 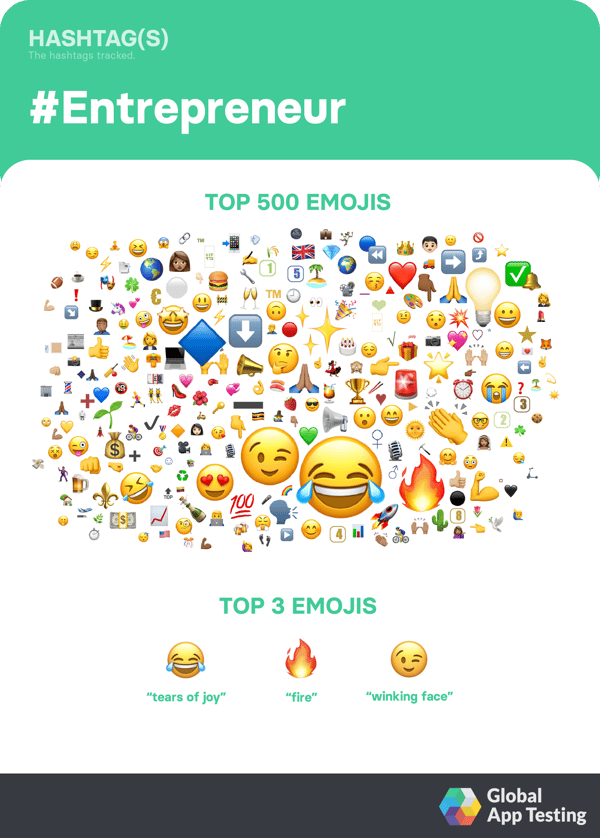 #Netflix
#Netflix had mostly 'Tears of Joy' followed by the second most popular, 'loudly crying face'. 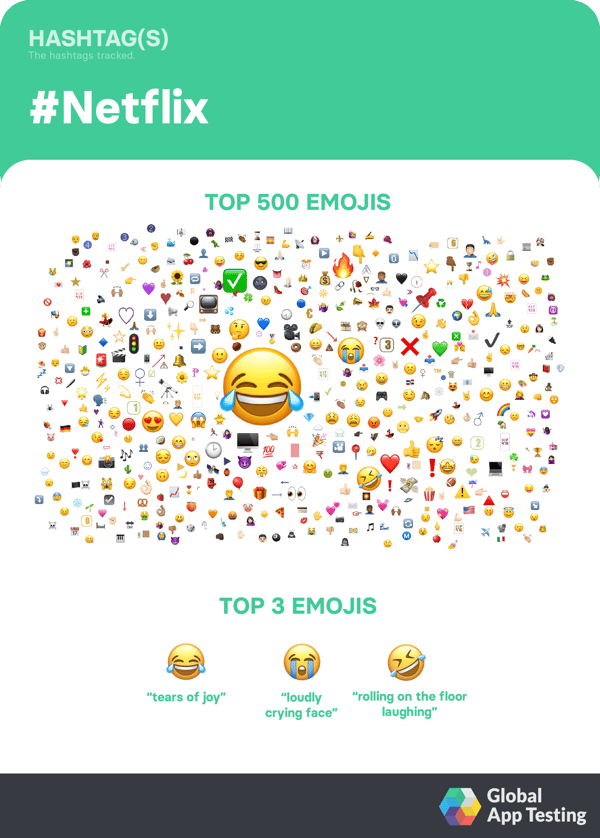 #Network
#Network‘s top three emojis were the 'Smiley with Halo', 'Rocket' and 'Fire' — all perhaps relating to positive reactions to technology and software. 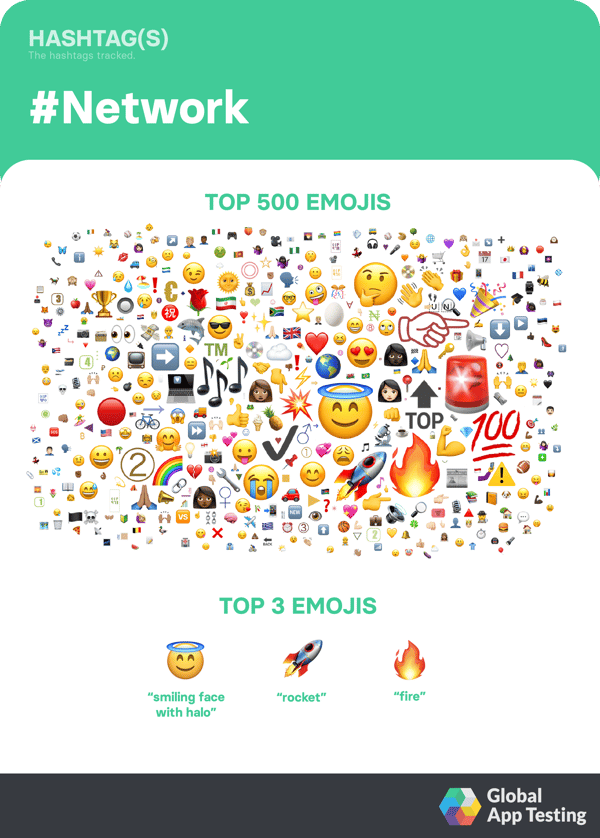 #Social
The right arrow was most popular with tweets referencing #SocialMedia, with tweeters using it to bullet point their views.

#Success
'Fire' emoji seemed to represent #Success the most! 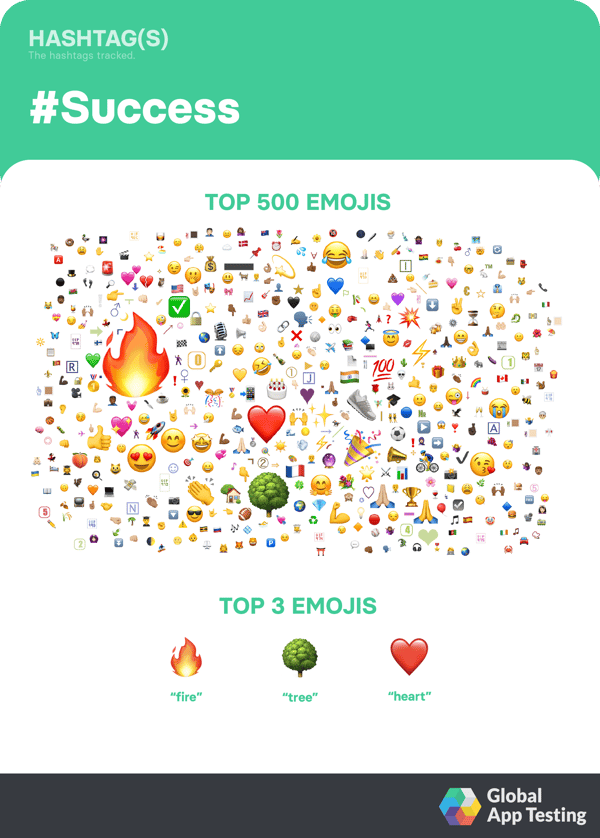 #Technology
Perhaps technology is funny, or the fails and issues that we experience make us laugh with irony. Either way, the 'Rolling on the Floor Laughing' emoji was most used for #Technology among Twitter users. 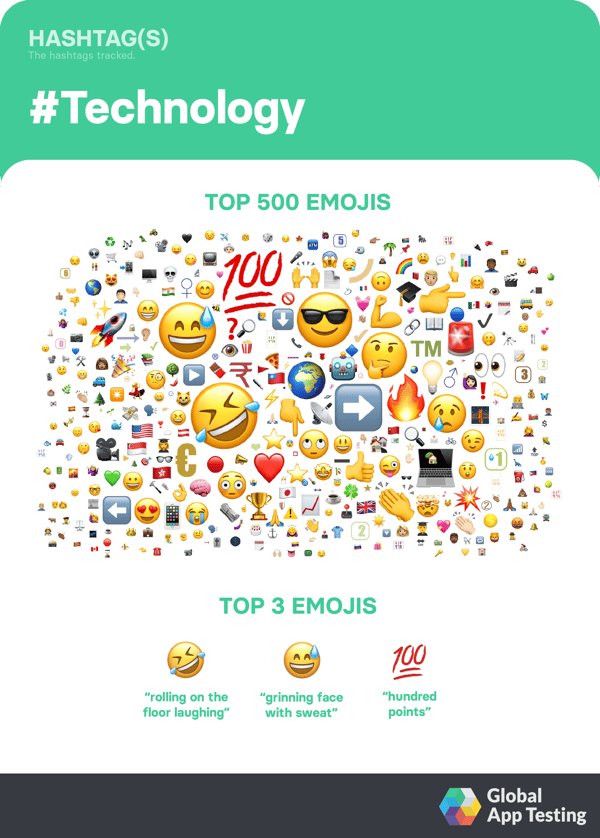 #WorldEmojiDay
With #WorldEmojiDay not long ago, we included the most commonly used circular icons in our search, tying in with the 50th anniversary of the first moon landing! 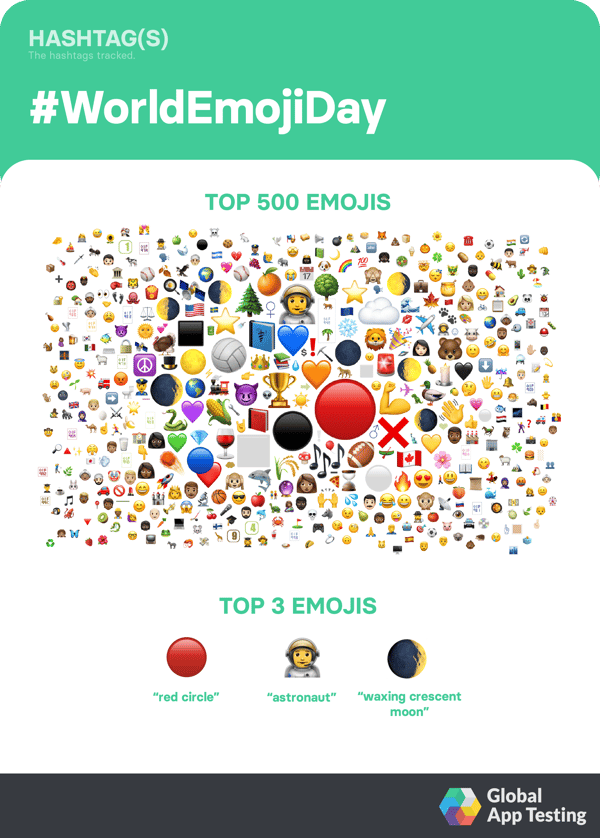 Don't underestimate the power that a simple emoji can have over a user's emotional engagement with your app. These small, colourful icons speak a highly relatable, universal language that everyone understands. They are culturally diverse and rich in variation, not to mention a creative way of expressing yourself when there are simply 'no words'.

In the busy world of building an app, we can often overlook the small things that make a big impact. Take a moment to consider how using an emoji might benefit your product. From a welcoming 'Wave' in your customer onboarding process to a congratulatory 'Hi-Five' for completing a positive action, there is always an opportunity to connect with your customer, and get 'emojinal'.