Manual Testing - what is it?

Rigorous testing is the key to successful software development. Ideally, you want all bugs and glitches to be found and fixed before the product is released to market—avoiding the need for costly retrofits and the risk of annoying customers.

Automated testing can save time and money, but you can’t underestimate the strength of the human touch in finding errors, especially when it comes to usability testing for real end-users. This article will show you why manual testing is so crucial, and highlight some manual testing best practices.

Speak to a QA Expert

1. What is manual testing?

2. What is a manual testing example?

3.1 The pros and cons of manual testing

5. How manual testing is performed

👉Crowdsourced Testing: What Are the Benefits?

What is manual testing?

Manual software testing is when human testers check the quality of a new application without using automation tools or scripting. The purpose is to identify bugs or defects, ensure the product is error-free, and check it conforms to specified functional requirements.

The process compares the behavior of a software application (or one of its components or features) with the expected behavior which was defined in the initial phases of the software development life cycle (SDLC).

Manual testers design test cases or scenarios with 100 percent test coverage, and execute them one by one before verifying the results. They ensure that any reported issues are passed to the development team to fix, and then tested again.

One of the fundamental principles of software testing is that 100 percent test automation is not possible—so manual testing is an essential part of your quality assurance process.

What is a manual testing example?

Manual testing has many real-life applications, and is especially handy for assessing usability and accessibility. For example, if you were launching an ecommerce website, you would need to check things like:

Under manual testing, testers would check the codes that drive each of these functions to ensure they work as the client intends. Manual testers are also able to comment on the look and feel of the website, evaluating it from the user's perspective. 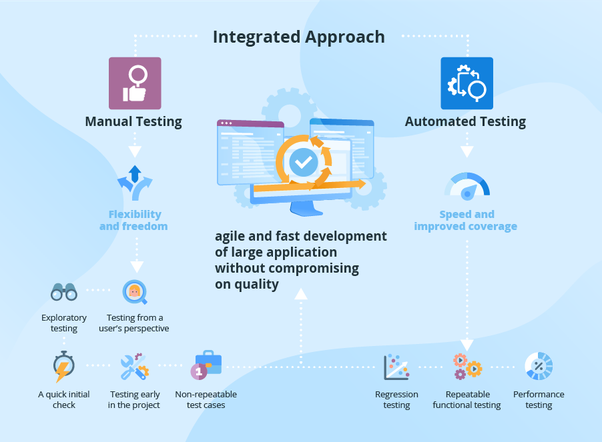 Automation testing is recommended only for stable systems which are likely to have fewer bugs, and is mostly used for regression testing and performance testing. Testing tools like JMeter and Selenium are commonly used.

The pros and cons of manual testing

Although manual testing is essential if you want to iron out the highest number of bugs, there are some downsides as well as plus points. We’ll take you through the main pros and cons, so you can see some of the challenges and rewards associated with using this methodology.

The pros of manual testing

Automated tools are smart, but they’re not as smart as humans. There are certain things that only a real person with real-world experience can spot. So when it comes to identifying bugs and glitches in software, manual testing is more likely to catch ’em all.

Manual software testers bring a valuable human perspective as well as accuracy, by focusing on the look and feel of a product. They can evaluate the application’s visual components and highlight UI and UX issues by adopting the mindset of the end user.

The manual method is particularly useful in ad-hoc testing, as it’s easily adaptable when unplanned changes are made to software. The human input means test cases can be redesigned or tweaked with relative ease. Manual testing is also agile enough to be performed on all kinds of applications.

Although manual testing requires skilled labor, it can actually save your company money as it doesn’t need any expensive tools. Automation tools can be costly to install and will take time to set up and learn. 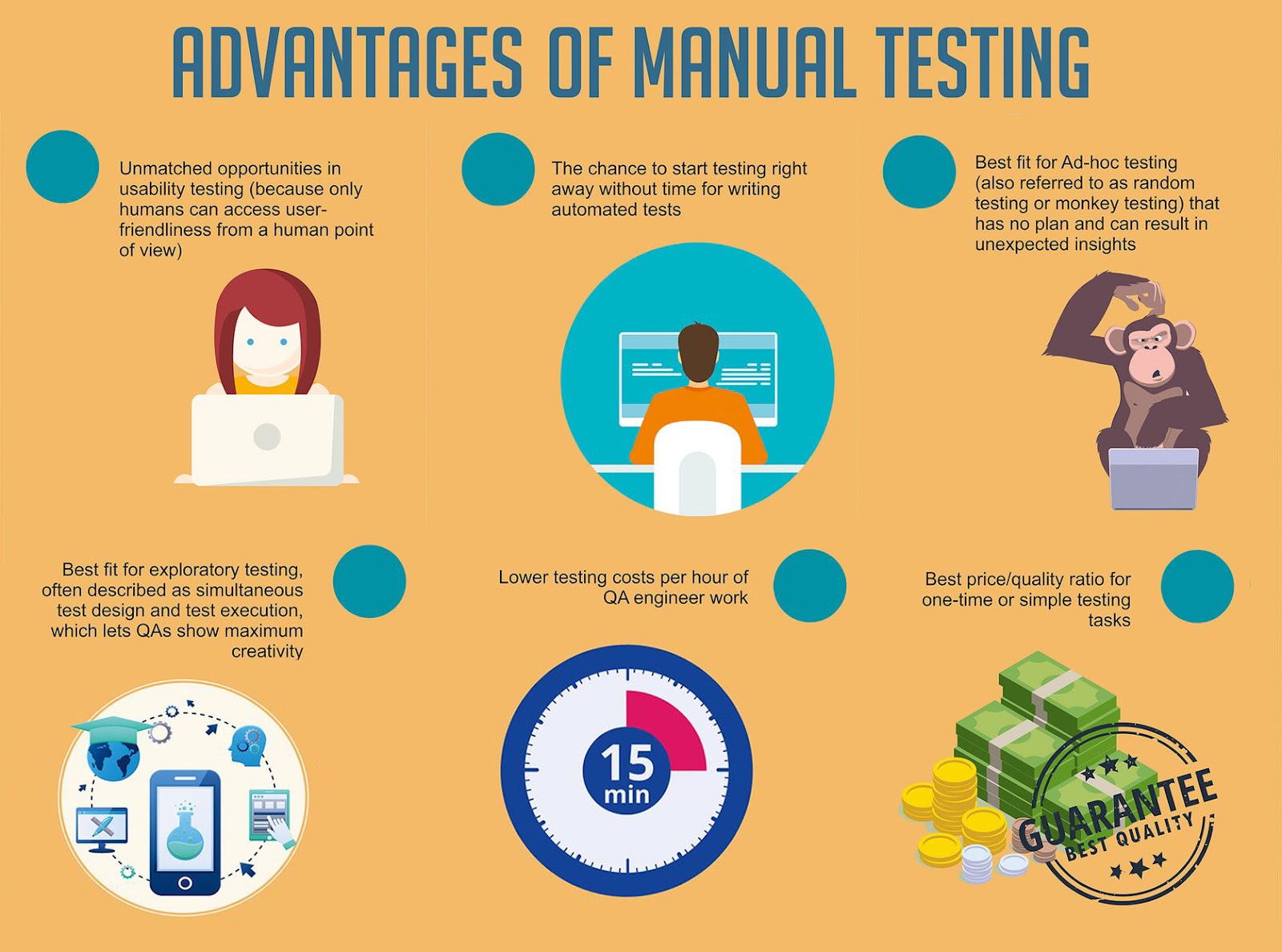 The cons of manual testing

Manual testing is undeniably more time-consuming than automation, which means the testing process is slower and can sometimes be more costly. It also requires a large number of human resources, with testers requiring high analytical and creative skills.

Certain types of testing, such as performance and load testing, are not suited to manual methods. For example, humans cannot simulate a large number of users for a performance test in the way a machine could. Large amounts of test data, too, are more efficiently handled by automation.

This is the flipside to #1 in the “pros” column. Humans are smarter than machines in many ways, but they’re also prone to human error. Since manual testing is repetitive and boring, it’s possible for testers to lose concentration and miss something.

As the manual testing process can't be recorded, manual tests are not reusable—you’ll need to develop separate test cases for each new application. It’s much easier to do this in automated testing where the scripts are reusable.

Manual testing has many variations, with different types suited to different software and environments. Let’s take a look at some of the most commonly-used manual testing techniques.

User Acceptance Testing (UAT) is performed by the client or end-user, to confirm that the software meets the agreed requirements. Sometimes called pre-production testing, it takes place during the final phase before releasing the product to market.

UAT is an example of functional testing and types of acceptance testing include Alpha (executed within the organization) and Beta (where the application is released to a limited market to generate user feedback). 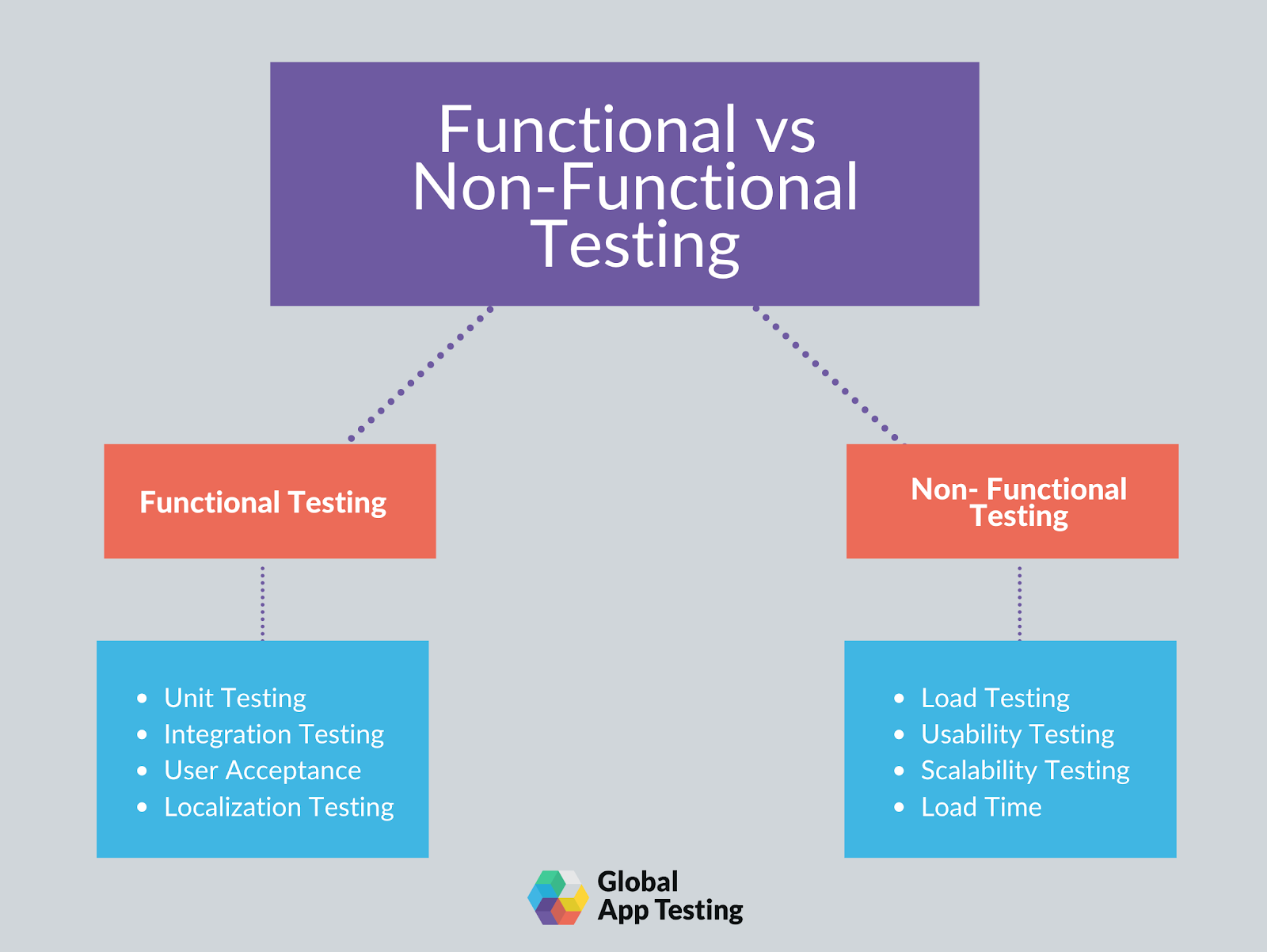 Also known as behavioral testing, this method aims to analyze an application’s functionality from the end-user’s perspective. The internal code structure is not visible during testing (hence the name “Black Box”), so testers are only aware of the inputs and expected outputs of the software.

Integration Testing is the process of testing an application with two or more integrating components. It is performed once the individual components have been unit-tested, and aims to identify problems with the interfaces and the interactions between them.

The two main methods are the Bottom-Up Approach (moving steadily from the bottom module to the top module) and Top-Down Approach (the opposite).

System Testing means testing the system as a whole, once all its components have been unit-tested and integrated. It checks that the complete application works as intended, by comparing it against the original requirements.

This is when the individual units or components of an application’s source code are tested, to make sure each function performs as expected. It is usually carried out by developers rather than engineers, as it requires detailed knowledge of the internal program design and code.

Also known as module testing or component testing, it simplifies the debugging system and helps to detect and protect against bugs in the future. 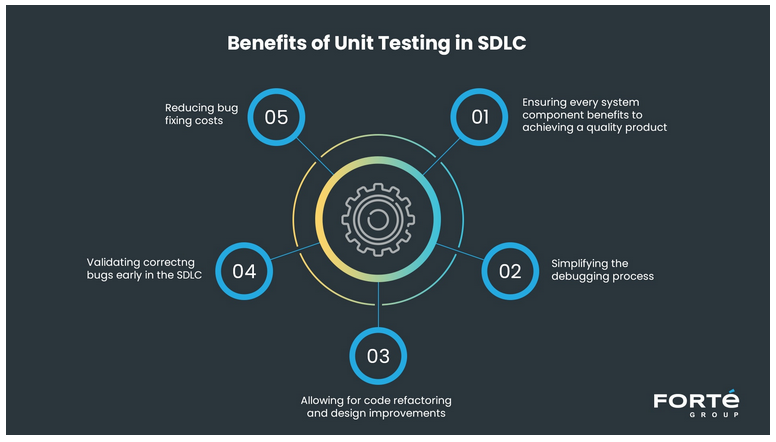 Sometimes called transparent box testing or structural testing, this is a method of testing the internal structures or workings of an application. It is performed by the developer, who checks the software’s internal codes before passing it to a test engineer.

The main focus of White Box Testing is on strengthening security and improving the software’s design and usability. A combination of Black Box and White Box testing is known as Gray Box Testing.

How manual testing is performed

We’ve already seen that there are several types of manual testing, but the overall testing process is common to all of them. Sometimes this will be carried out in-house, while some businesses prefer to engage an expert company to handle testing.

There are roughly six basic stages in performing manual testing:

The first thing testers need to do is to fully understand the project’s requirements. What does the client expect from the application? What problem is it aiming to solve for end-users? Testers must analyze all requirement documents in order to recognize the expected behavior of the software and exactly what needs to be tested.

Once the requirements are understood, testers can draft test cases to cover various scenarios, such as what happens when a user enters an invalid password or how the software would cope with a crash. These test plans will set out a sequence for testing functionality and usability across the entire application, measured against expected results.

It’s helpful to review the draft test cases with team leaders and the client, to check that they will cover all bases and make any amendments before commencing the execution. This will save time in the long run.

Manual testing can now be carried out, using any of the techniques listed in the previous section. As well as finding bugs, the aim is to identify potential pain points for users and loopholes that could be exploited by hackers. Testers execute the test cases one by one, sometimes using bug-tracking tools like Jira.

When bugs are identified, the testing team will pass the metrics to the development team in the form of a test report. This contains details on how many defects or bugs were found, how many test cases failed, and which need to be re-run.

Once the development team has fixed the bugs, the software is handed back to the testers. They carry out the test cases again to check that the problem is resolved.

Although automation is a time-saver, manual testing remains a vital part of software development. Human testers can think like an end-user, and imagine multiple test scenarios for an application or function.

It’s worth remembering that while software testing attempts to find as many bugs as possible, identifying all possible defects is literally impossible. Manual testers can often spot issues that a machine could overlook, but they are also susceptible to human error.

Using a combination of manual and automated testing is the most effective way to catch the highest number of bugs and defects. Experts like Global App Testing offer the best of both worlds—contact our team  to learn more and chat with a friendly agent.

We’d love to give you a personal demo of our platform. Find out how we manage, execute and analyse test results to help you release high quality software anywhere in the world.